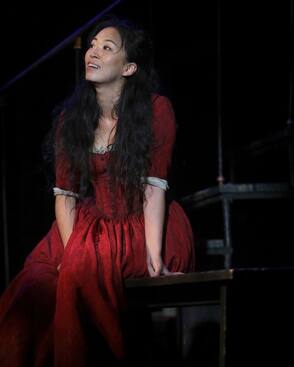 ​"EJ Zimmerman ... has a strong, lush voice; moves like a well-trained dancer; and dances with the best on this stage. She also plays her scenes with heart and warmth and charm when she needs to. She comes the closest to Dickens in this show of anyone in any role. Her ballad ... was moving and her second-act opener, “Oom Pah Pah,” had all the glory of the improvised pub songs one can still occasionally hear in London if one is lucky. This actress is a find and I hope Goodspeed keeps her around for other shows in the coming seasons." - J. Peter Bergman - The Berkshire Edge      full review
​
"EJ Zimmerman is dynamite as Nancy; as soon as she walked out on the stage I knew she would give a performance that would wow me, and she did not disappoint. I like that Nancy doesn’t crack or cower. Her rendition of “As Long as He Needs Me” knocked me out; she provides us with a determined, bold Nancy throughout the production with little vulnerability." - Tara Kennedy - Onstage Blog       full review

"EJ Zimmerman sizzles through “It’s a Fine Life” and “Oom-Pah-Pah.” She nearly succeeds in turning “As Long As He Needs Me” from a disturbing ballad of subservience into a slightly milder statement of empowered self-delusion. For those who saw Zimmerman play Christmas Eve in “Avenue Q” at Playhouse on Park last year, it’s not a surprise to see her take another stereotyped female role and imbue it with strength and character. But that doesn’t mean it’s not hard to do. Zimmerman doesn’t do winsome or meek; she plays hard, and gives this “Oliver!” a woman to cheer for. " - Christopher Arnott, The Hartford Courant      full review
​
​"More applause than 'Old Man River'" - John Riccucci 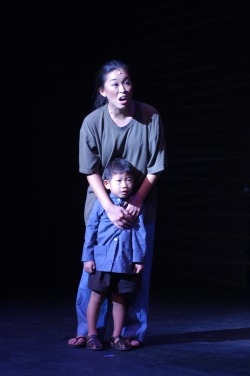 "EJ Zimmerman gave a truly electrifying performance as Kim, displaying astonishing technical skill while managing to squeeze every drop of emotion out of her songs. Her duet with Sarah Rex in "I still Believe" was particularly goose bump-inducing." - Todd Wallinger, The Gazette     full review

"At the center of the production is Zimmerman's sensational performance as the Vietnamese woman who falls in love with an American G.I. Zimmerman, who debuts at the AC after playing Kim in an Arizona production of the musical earlier this year, is a mesmerizing mix of sensitivity and strength, innocence and backbone." - Mark Collins, The Daily Camera     full review

"Luckily he had the support of the very talented EJ Zimmerman in the lead role as Kim. She was the perfect blend of inner strength and outward beauty that worked flawlessly in the role. Her silky voice filled the theatre as her passion and intensity kept the audience involved in her struggle throught the show." - Deb Flomberg, The Examiner     full review

"As Chris and Kim, Kevin Vortmann and EJ Zimmerman do a remarkable job quickly establishing a deep and believable emotional bond... It helps that they have angelic voices" - John Moore, The Denver Post     full review 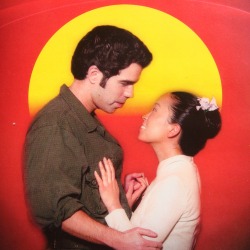 "EJ Zimmerman... gives a heart-breaking performance and the scene of her hanging to the gates as the last helicopter leaves the U.S. Embassy in Saigon is charged with emotion. Tears may -- no, tears --SHOULD flow" - Ron Levitt, Florida Media News / ENV Magazine     full review

"[A]s the show progresses [EJ Zimmerman] demonstrates her strength through her vocal stamina, and the simple purity of her sound is well matched to the nature of her character... Moments like the second act hotel scene with Ellen show that Zimmerman is also a fine actress in this difficult role" - John Lariviere, TalkinBroadway.com 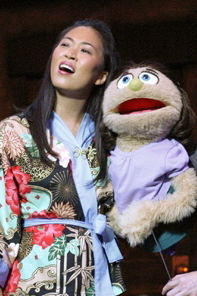 "The whole cast is terrific. If standouts had to be named, they would be Mr. Smith (who played Princeton on Broadway in 2006), Ms. Hollander and Ms. Zimmerman" - Anita Gates, The New York Times     full review

"As Christmas Eve, ... EJ Zimmerman is a spreader of love among the “Avenue Q” puppet populace, and sweetly infectious. Her rendition of “The More You Ruv Someone" ... is a lovely and touching interlude" - Lee Davis, The East Hampton Press & the Southampton Press     full review

"It is easy to suspend disbelief with such a talented cast... Michael Edward Baker (Brian) and EJ Zimmerman (Christmas Eve), play the two characters that do not have puppets and meld beautifully into the whole scenario" - Roy Bradbrook, Dan's Papers     full review
AVENUE Q
Playhouse on Park
​ 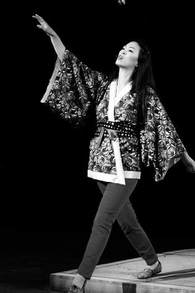 "EJ Zimmerman shines as Christmas Eve... The show has such a casual feel that when her song 'The More You Ruv Someone' comes up in the second act, it is a showstopper with a stellar voice" - Tim Leininger, Journal Inquirer